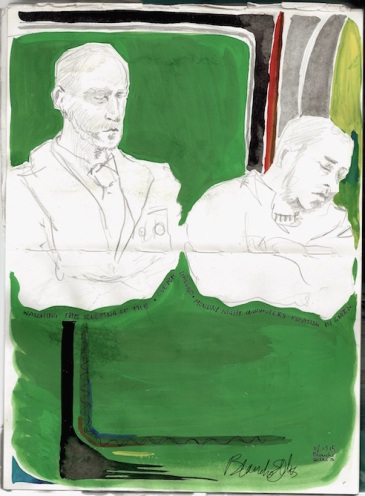 The largest collection is of Travel Portraits, mostly from the London Underground and Overground. So I’ll start with just a few of those. Trying a new – non-gallery format – let me know if you like it better !

I think this is my favourite TFL sketch so far.

It captures hundreds of identical moments I see watching people every day – the commuter all bundled up for winter and tucked into a sensationalist free paper whose headline blares absurdly from the crinkled front page.

The two guys from this page look like they’re from totally different centuries. 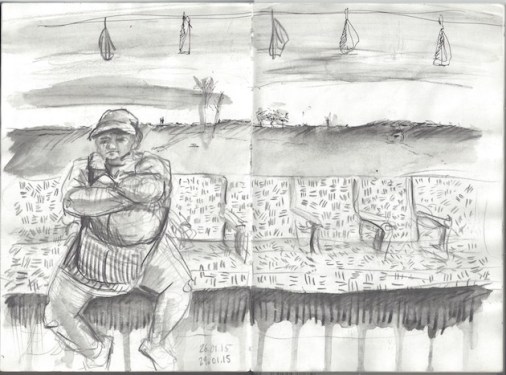 Lady on the late train back to Brockley from London Bridge, fellow on a train from Hove to London. 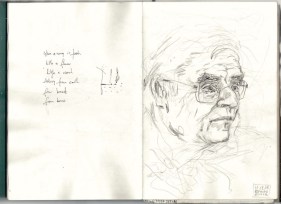 Newspaper headlines, brands and names of supermarkets on shopping bags are written all over public space, part of the markings of our world.

Sometimes they seem to make a visual point, I can’t always work out what it is, and don’t want to pin it down, but I like to include these things where they strike me as interesting or often, as amusing or absurd in some way.

A friend also sent me this excellent cartoon about drawing in public – it’s from New York. 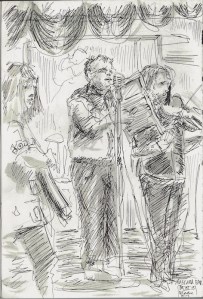 and a new series that has been emerging in this sketchbook…

I have just discovered how to do these mini animations. I am fascinated with the process of painting and the plasticity of the paint, I love to flick back and forth from my progress photos watching the figure approach and melt away.

This is a self portrait that I left unfinished, you can see I wiped the eyes away in the morning. They didn’t feel right. But I became quite fond of the unfinished piece. If I leave a piece for too long it grows on me like a person and I find it hard to touch them as they have their own presence. People, I never meant to create, sit in my room and I don’t quite feel I have the right to change them anymore.

In September I had the chance to work an a very interesting project created by Nicoline Van Harskamp. A reading of Pygmalion. It was live-translated back from over 14 different languages back into English and recorded. My drawings capture the reading in progress.

My drawings were then published along with the script in a limited edition book by Onomatopee.

Some of my reportage drawings from Nicoline Van Harskamp’s exhibition are showcased by the publishers Onomatopee. A fuller set of my drawings from the days events have been published by Onomatopee in the book which resulted from the reading Nicoline set up at Kunstraum Gallery in Hoxton, London.

I really enjoy reportage drawing and capturing the mood of the participants and how the marks of the drawings echoed the varied marks of the many written languages in the open books.

There was a great humour in some of the phrases as they were re-translated, the process also showed up some fascinating cultural assumptions and differences. 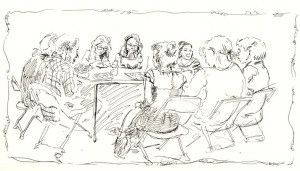 I hope to have the chance to work with this project further as I find the links between text and images and the cultural crossover and divergence fascinating.