Exploring visual response to music and various textures and ways of ‘conversing‘ with each other through art.

Beginning with drawing to music with eyes closed, focusing on the feeling rather than the outcome. Then a raft of association games visual, spoken and gestural.

I ask them to make marks and symbols for different ideas and emotions, to get them to develop their visual expression past direct representation or reference of visual objects.

Then working in pairs they respond to each others mark making. After trying this several times we draw to music again… or paint, though this can get very messy!

Then we work with responding to textures – initially photocopied ones and then sometimes coliograph and other prints that I make in various colours. 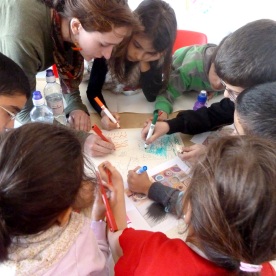 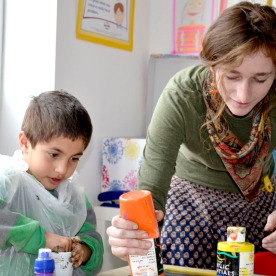 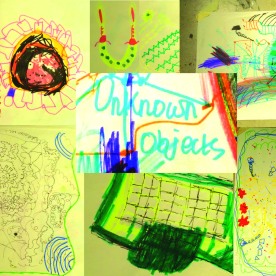 I asked the children to draw something that they’d never seen before – trying to get them to imagine past visual reference and to begin making symbols that were more abstract than the ones they already know – smiley faces, stars etc. 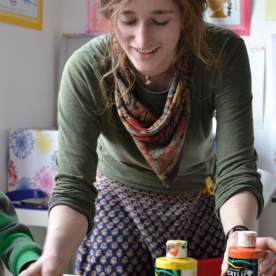 For some the paint proved more conducive to mud pies than symbol making!

Having drawn to music with eyes closed the first time, here they are painting to music

In this last exercise of the day the children began not only drawing stock images from their mind but looking for images, and interesting, suggestive shapes in the paper they were working on. 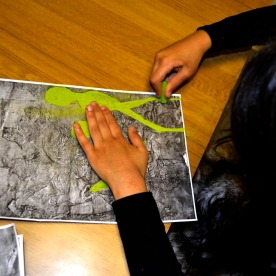 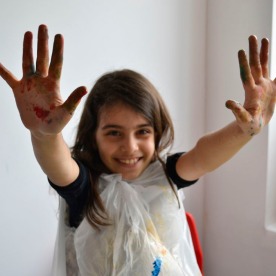 The kids have fun with this workshop and even in one session I begin to see some developments, they begin finding images within the textures and developing them, some also moving away from the area of recognizable references (houses, people, cars etc…) and enthusiastic scribbles, to considered and ambiguous shapes that suggestive and interesting without being defined. This suggests a move towards a subtler and more considered expressiveness, and the fascination with shape and colour that underpin much compelling creative work whether abstract or figurative.