Ideals of the Veils and Stones project:

To forge accessible ways to create personal and communal narratives, because humans live by narrative and the global culture is accelerating towards an alienating and fragmenting barrage of information. To find a way to involve people, not only ‘artists’, in the process of creation, and by this, also encouraging them to become active, not passive receivers of ‘art’ and to respect their own and others expression in small, intimate enactments of ‘art’. To create moments that are meaningful in their intimacy and individuality and to tie them into a wider, meaningful context that doesn’t deny, but respects and celebrates their originality. This ‘wider’ context could be universal in its perceivable humanism, but more importantly, exists within a community, however small – as a reflection of its own depth that doesn’t need the popular validly. TO ENCOURAGE CONFIDENCE WITHIN peoples expressive LANGUAGE, PERSONALLY AND COMMUNALLY, AND AWARENESS OF THE FREEDOM OF CREATIVE SPACE WITHIN IT. 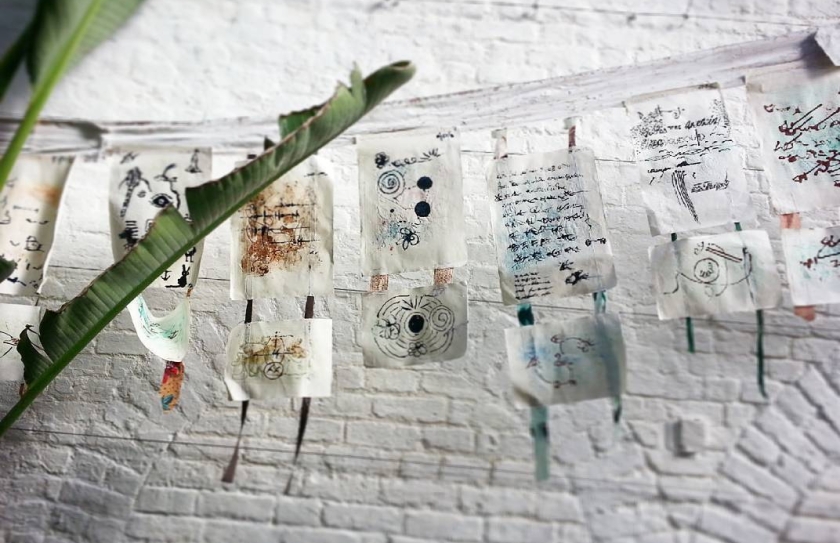 I have been thinking a lot about narrative, how it forms our understanding and expression:

“Only that which narrates can make us understand” Susan Sontag

“Information is alienated experience. Only experience can de-alienate the bits”, ‘You Are Not A Gadget’ – Jaron Lanier

And about the role of repetition, in literature, oral storytelling, dance, theatre, music, and visual arts. In some arts repetition occurs in words, in others, by gestures. Sometimes the repetition can be indirect – only an echo, perhaps of mark or of material. I began to look practice with repeating very simple marks, looking for a language: 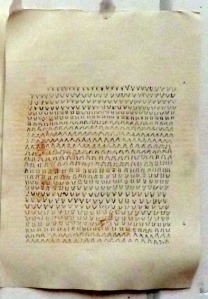 I began to think about letter-writing, which I do often, and what is so compelling about it. When writing a letter, expression has a direction, an audience, a confidant.  It draws on the need not just to create but to communicate (an instinct that necessitates creation). I thought also about the materials. Never have I achieved the amount of personal expression on a keyboard as I have with ink and paper. The expression of handwriting alone, large, small, neat, messy, slanted, loopy changes with my mood and says so much, it is transcribed body language.

I also write on unconventional materials and in unconventional ways – many scraps of paper collect thoughts, falling from the envelope they have a shifting order. I write on many different textures, switch from drawing to words and back again, draw with my words. I find that the textures and colours fit different moods and ideas. Sifting through a pile of papers can inspire the subject, or a subject can pick the paper.

Particularly I thought of a letter written on tracing paper, partially painted on the back so that the reversed letters emerged in mysterious shapes when the letter was turned over. I wrote of the desire;

“to see the strange and beautiful shapes our meanings make before they leap past the eye and into language.”

From all these thoughts sprang the letter writing project, which became the Veils and Stones Project. I began making vast amounts of colliograph prints with different colours, textures and moods. I asked people to write a letter, on any one of these that suited, presenting both choice and inspiration, but to write it without words. I also asked them to use an ink dropper to move them away from well known motions of the pen and free up their hand from habits of language.

From a familiar starting point, writing, the unusual materials and removal of words begins a journey, of de-familiarisation and re-familiarisation. Taking an accessible and personal activity, writing a letter, and moving it step by step towards a new form of expression and a wider context.

Each letter came out in a distinct visual language. And the writers found something useful and fulfilling in the expression. I wanted both to take the individual experiences further and to join these letters in some way that gave them meaningful context. To re-familiarise the work through context.  I began to have ‘visual conversations’, as in the Serendipity project, using the symbols from their letters. Without knowing the meaning of the symbols however these conversations felt vague and full of misunderstanding. To explain their symbols, requiring them to be converted into the words they had been liberated from, would undo their power.

So I began a new tactic. Creating a map or diagram from the letters. Asking the writer to chose 5 symbols of importance from their letter and placing them north, south, east, west and centre. I transcribed them onto a separate print and asked the writer how they linked together; to describe the connections (without explanation) between the symbols. I then interpreted their answers into lines that joined the 5 symbols into a strong image. Often people had to think very hard about the connections, and said that, like the letter, the map or diagram had revealed something to them of their own mind and understanding and helped them to find some order. Writing is very linear, but our experience, particularly our emotional experience often doesn’t occur this way. Using the familiarity of writings linear narrative to discover important symbols and then freeing them from from that linearity allowed some people to reach an expression and understanding more revealing of their mind and connected to their experience of thought and emotion.

Combining the letters with the maps gave the language of each letter a greater sense of meaning. They also began to take on the context of the other letters. Each writer became more invested in the letters of others. I began to think of these letters as painted veils, veils which are seen and whisper what is not, hanging side by side, mysteries on display. 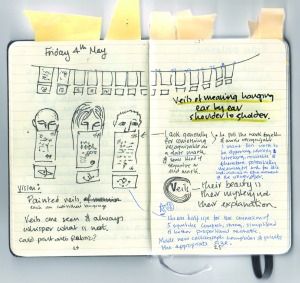 The body of letters grew and grew and as I’d hoped, the repetition of material; with it’s subtle variations, format;  with the letters followed by maps, and the number of pieces began to build the sense of a mutual language. 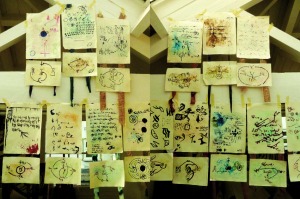 The experience of letter-writing was so personal and tactile but when I thought of them hanging I still wanted something for people to touch and engage physically. So the signs from the letters took another journey as I began making pebble-like clay stones and carving two symbols from each letter onto a stone. (see following page)