Third update on the India sketchbook…. the new books is bound and running ahead now – I got geeky and made another paper index. 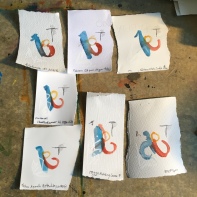 We were gradually coming to the end of the train ride, and our work with the Jagriti Yatra…

We had a dance party at sundown at the Gram Vikas school on the final evening of 2015. Kids of all ages (up to and including people with more than a handful of decades) jumped around and played volleyball…

I did something unusual for me and went straight into watercolour to catch the movement of the crowd. Really satisfying, something I want to do more often.

They had a House of Imagination – full of the kids art which was honestly so impressive. They had made these intricately cut out layered paper artworks that you put a light behind. The way the light filtered through the paper reminded me so much of the haze that I saw morning and night in india. In the city or the countryside the haze was so strong that items at different distances were set, just like cardboard cut outs, stepping back in layers of opacity.

This style of cut out….

Near Deoria I saw an old man cycling along the edge of a field in the distance, he looked like cut out figure, pulled along by a string that ran below the rushes, in the delicately layered, cut-out theatre of dawn.

And onwards we travelled – 450 strong – 600 with the full train crew. Somehow managing to alight at each place and return to our train intact…. during some Loooooong waits on the platform we started song circles.

Meanwhile, in my personal sketchbook… 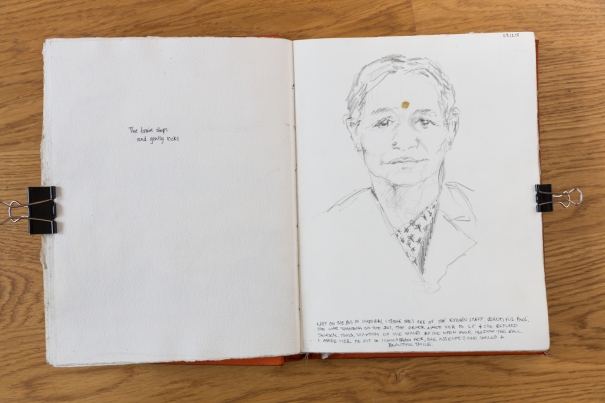 I got to draw this lovely lady on a very bumpy bus… she had the most beautiful face.

And I realised, at about this point on the journey, that I would forever miss being rocked to sleep by a train when the journey ended and I was living back on solid, steady ground, rather than rails.

In the next part we travel to Rajasthan….

Find the first two parts of the sketchbook-journey:

More artwork from this and other projects: